The total which my sheet has predicted correctly has held pretty steady, increasing by 0.92% to 65.38%

The top 3 Leagues for results being predicted correctly are Scottish Premier League, French Ligue 1 and Serie A– all with over 70% of bets correct.

The lowest 4 are the English Premier League, League One and League Two along with Serie B – all are around 61%

The largest drop was the Portuguese Liga which dropped by 6.5% - no other league decreased by more than 2%

Table below showing some of these results. 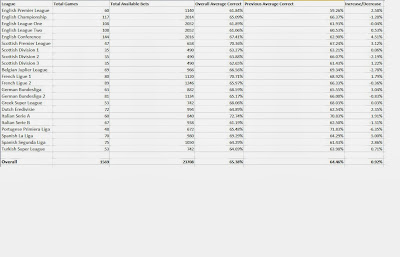 Couple of things I’m working on to improve the usability of my sheets in the short term:-


I received a couple of comments last time I posted an update – if you have any advice or feedback on how I can improve these, whether you are doing something similar or just noticed something I may have missed please feel free to comment and I’ll respond when I get chance!

Dave Willoughby
Sheffield, South Yorkshire, United Kingdom
I currently work as a Performance Analyst on a full time basis for Onside Analysis. After a few years of pursuing my dream job including working for Rotherham United, Coventry City Ladies and Barnsley, I am finally doing for a living some I love.